“Nature is not a place to visit. It is home.” ― Gary Snyder

Few objects, least of all vehicles, are as closely tied to conservation in Africa, the saving of species and the fight against extinction as the Land Rover Defender. Growing up in South Africa and spending time in ‘the bush’ it was all Land Rover Defenders. The workhorse, the game viewing vehicle, the replicas made of tin or reed grass offering hours of entertainment to children and great souvenirs for tourists.

One of the more famous or at least better known Land Rovers in the 1960’s and up to this day, in Swaziland, was an old 1 series by the name of Jezebel. Jezebels story is closely linked to the story of Big Game Parks in Swaziland and the story of pioneering conservationist Ted Reilly. With decreasing game numbers, high levels of poaching and an uncertain future for the wildlife of Swaziland, Ted Reilly set up the first game park in Swaziland, to save the countries wildlife.

The plan was simple, get out and get all the wildlife left in the country and return it safely to the newly established Mwilwane National Park, previously the Reilly’s family farm. However, in a mountainous country, with few roads, during the early years of game capture it was important to ensure only the best were chosen for the job. It would require long distances over uneven, rough surfaces, finding and chasing down unpredictable wild animals at a moments notice, often for hours on end and so Jezebel was hired as the best lady for the job.

Jezebel worked tirelessly for years to save the wildlife of Swaziland and set up what would later become the National Parks of the country. Jezebel was so integral a part of the team that on the 50th Anniversary of the park it was decided to have her bought back to her former glory, to be displayed proudly in the park and teach the younger Defenders what real conservation was all about. Unfortunately, the people hired to re-furbish the beloved candy and icon of conservation in Swaziland, decided to strip her for parts before what was left could be re-claimed by Big Parks. 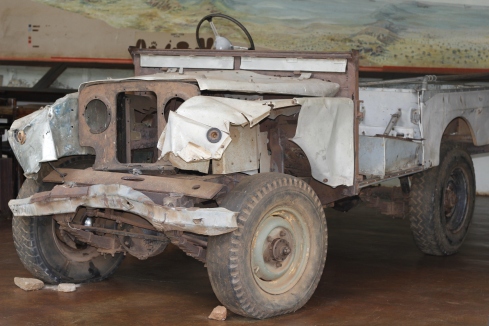 Today, retired and missing parts, Jezebel sits in the Mwilwane National Park in Swaziland as a testament to the vital role these hardy vehicles have played in the conservation of African wildlife and as a reminder of what people can do, when they set their minds to it, to save our national heritage.

5 thoughts on “Jezebel, the end of a legend and the story of conservation in Swaziland”

This site uses Akismet to reduce spam. Learn how your comment data is processed.